In the Footsteps of Alix de Morainville: My Research Trip to France, Part 3 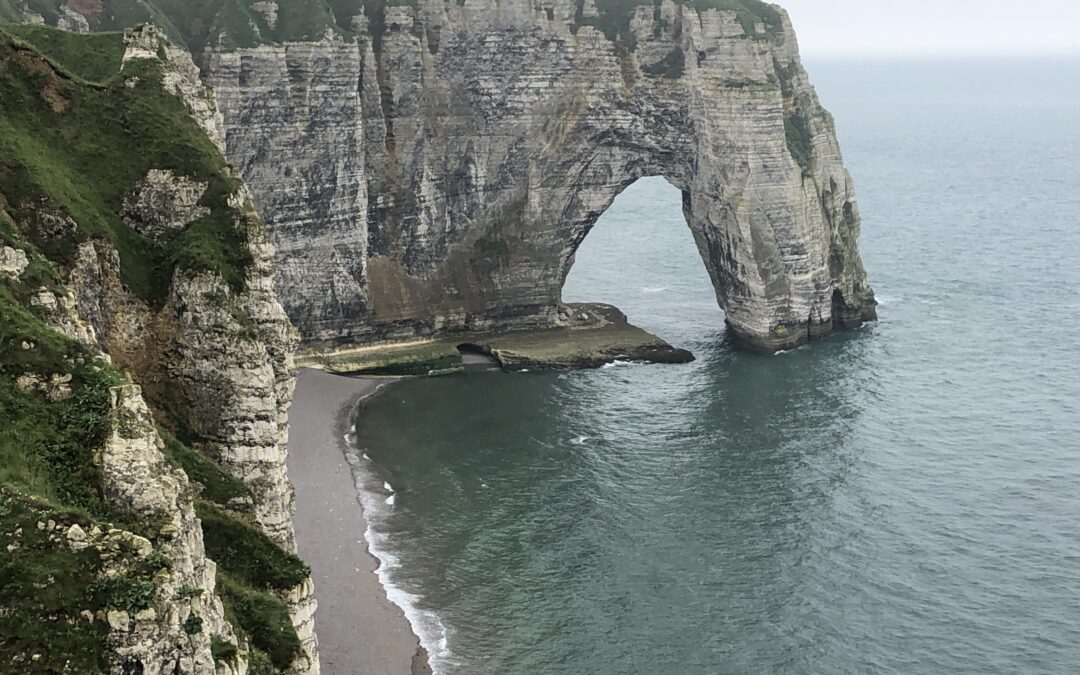 For several years now, I’ve been working on a historical fiction novel set during the French Revolution. The novel re-tells the story of Alix de Morainville, first introduced in George Washington Cable’s 1888 book Strange True Stories of Louisiana. The legend of Alix de Morainville holds that she was the daughter of a Norman count, raised in the tiny fishing village of Morainville, who later moved with her parents to the court of Louis XVI and Marie Antoinette at Versailles, and married her cousin, Vicomte Abner de Morainville. After her husband was killed during the French Revolution, she married her gardener, Joseph Carpentier, to lose her title and save her life. Then the two of them fled to Spanish-controlled Louisiana, into the wilderness of the Attakapas Territory, in modern-day St. Martin and St. Mary Parishes.

Read Part 1 of my adventures here.

Read Part 2 of my adventures here.

In Cable’s book, Alix de Morainville grew up in the Norman town of Morainville, which he describes as a fishing village where her family’s château is perched atop a cliff looking over the English Channel. But while Cable’s “Strange True Stories” drew on facts (exactly how much fact remains the subject of debate), the stories themselves are fiction. So while there is a Norman town called Morainville, it is not on the coast. I chose to use Étretat as the model for coastal Morainville because of its famed white cliffs, immortalized by Claude Monet, and because it is home to Château les Aygues. Although it was built later than my story is set, Château les Aygues is nevertheless a Norman château that I wanted to serve as a model for Alix’s home. 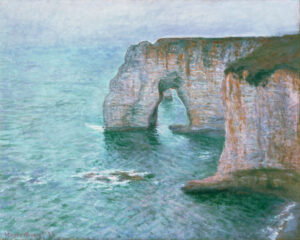 One of many paintings of Etretat by Claude Monet 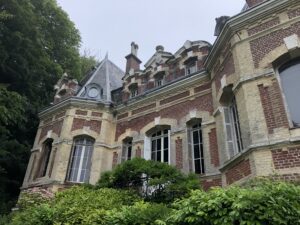 It was pouring down rain when I arrived in Étretat (how I got there is a story in itself), and I had to hike immediately to Château les Aygues through the downpour in order not to miss the tour. Photography is not permitted inside the château, but the owner did compliment my French, and I found some interesting tidbits of French and Norman history inside.

After the tour, once it finally stopped raining (although the sun still did not come out), I was able to begin exploring both the town and the cliffs, including the museum at the top of the eastern cliff. 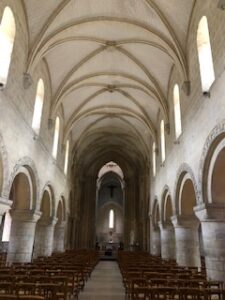 The Church of Notre Dame in Etretat 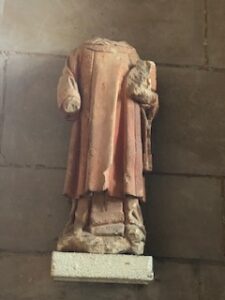 Statues in churches throughout France were beheaded during the Revolution. The ones in Etretat still remain so. 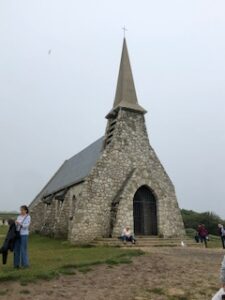 The more ancient Church of Notre Dame (11th century) at the top of the Eastern cliff, which is no longer in use. 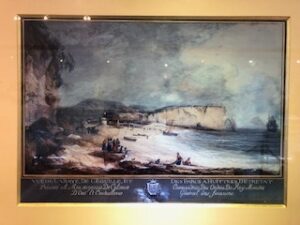 1786 painting by Jean Alexandre Noel of fishing boats in Etretat

I also met another woman traveling alone, and with her company, I was emboldened to explore the beaches at low tide, a very slippery place where I might have been afraid to go alone. The beach in Étretat is not made of sand. The most accessible part is made of smooth, beautiful pebbles that are surprisingly large—some the size of chicken eggs, and some much larger. But the western section that is only accessible at low tide is a sort of field of rocks that look a bit like cheese, and lead toward caves that are both natural and man-made, with the man-made ones having been cut by Nazi soldiers during the occupation. It’s truly a beautiful and unique landscape. 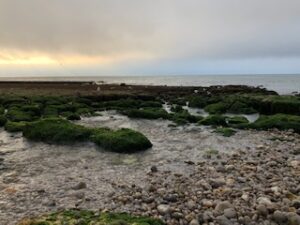 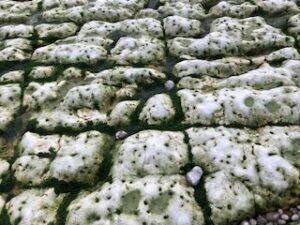 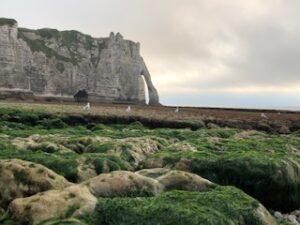 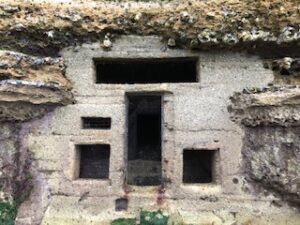 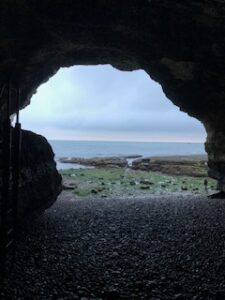 The view from inside a cave

The second day in Étretat, my new friend and I explored the western cliffs as far as we dared, and in the last few hours before I had to return to Paris to catch the next day’s flight home, I finally got to see Normandy in sunlight. There is no wonder why Monet loved the light in Étretat. But be warned: if you go there, the seagulls are your enemies. I bought an ice cream cone, only to have one of them steal it directly out of my hand. So if La Citoyenne features seagulls as villains, now you know why.