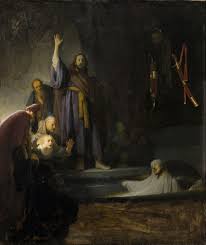 In my parish, every year we read the “Optional for use with the RCIA” readings for the 3rd, 4th, and 5th Sundays of Lent, which means that this past Sunday, we heard the story of the raising of Lazarus. Lazarus as presented in the scriptures is a bit of an enigma. He might be the titular character, but his sisters Mary and Martha get most of the screen time, so to speak. Lazarus only appears long enough to stagger out of the tomb “bound hand and foot”—a feat of amazing dexterity, especially for a guy who’s been dead for four days. Lazarus never responds to his miraculous comeback. The scriptures do not record his gratitude to Jesus, nor perhaps his criticism—because who is to say that Lazarus wanted to come back? St. John did not record the answers to the questions Lazarus must have gotten tired of hearing. Where were you? What was it like? How did it feel to come back? Why don’t you write your memoirs and solve this whole question of the afterlife once and for all?

Of course, St. John knew his business, which was to bring his readers to know and love Jesus Christ, not Lazarus. He may not have satisfied his readers’ curiosity, but neither did he distract us from the central character with wild subplots. He left that up to less important writers like me.

Of all the characters in the story of Lazarus, Lazarus himself is the one with whom I most easily identify. I have had my opportunities to play Martha and Mary, weeping over the death of a loved one, “Lord, if you had been here, he would not have died.” But I also have entirely too much experience being Lazarus. I have not spent four days rotting in a tomb, but I have come a good deal closer to death than most living people—twice.

During my first semester of college, at age eighteen, my appendix ruptured, but I did not realize what had happened. I spent two weeks in my dorm burning up with fever, too weak to walk across campus to the infirmary. I thought I had the flu. Finally, I asked my parents to take me home and then said, “Mom, you’d better call a priest.” Yes, I asked for a priest before I asked for a doctor. A doctor could not have helped me at that moment. There comes a point when only Jesus can say, “This illness is not to end in death,” because the body has no resources left with which to fight. I knew instinctively that I had reached that point. Our parish priest anointed me that afternoon, a Sunday. On Monday, my father took me to the doctor, who sent me to the hospital, where I had surgery on Tuesday.

By the time I actually went under the knife, I had already recovered. The fever had broken, all of my other symptoms had disappeared, and the doctor remarked how silly he felt wheeling what appeared to be a perfectly healthy eighteen-year-old into the O.R. What he actually removed was not my appendix but the hard shell my body had formed to contain the pieces after it ruptured. There was no infection at all. “There are no recorded cases of anyone surviving a ruptured appendix without surgery,” my doctor said, “And there still aren’t because I operated on you. But you would have lived regardless.” I have never seen the expression my doctor wore that day on any other person’s face before or since. I don’t think he used the word “miracle,” but those were the eyes of someone who has beheld an event that he cannot explain.

You wouldn’t believe me if I told you how nonchalantly I received his news. Nor did the doctor, who kept trying in vain to elicit some kind of reaction from me beyond a shrug. What he said wasn’t news to me, except in the medical details. I already knew when and by Whom I had been healed. True grace comes very much as a matter of course. Miracles are inevitable in the light of God’s true love.

The second time I almost died was just a year ago, in March of 2017. I had surgery that was supposed to be minimally invasive, usually done as an outpatient procedure. It did not go as planned. I lost a great deal more blood than I should have, but no one told me that when I woke up. All I could find the strength to say was, “It hurts to breathe.” This prompted my nurse to pump me full of painkillers. All through the night after my surgery, I woke up every four hours or so to say, “I can’t breathe. It hurts to breathe.” Then I was given narcotics to put me back to sleep. I didn’t know what was wrong with me, but I knew the drugs were making it worse, even though I was too weak to say so. There came a moment when I received the latest dose and as I drifted off, I knew: I’m probably not going to wake up.

It was a moment of pure peace.

As in my other brush with death, the worst had passed before the doctors did what was necessary to save me. I was conscious and breathing without pain by the time the morning nurse came in, looked at my chart, and called the doctor to say, “Have you seen her numbers? I really think you should give her a transfusion.”

I did not experience cardiac arrest or brain death on either occasion, although I know I was very close. I did not have the “near death experience” of walking through a tunnel of light toward the open arms of Christ or my loved ones. I never saw any visions or heard any voices. But in my moments of greatest weakness, I learned that the veil between this world and the next is imperceptibly thin and easier to slip across—from both directions—than we care to admit when we’re healthy. I do not know if everyone experiences death the same way, but I know that I experienced near-death the same way twice. I shall be terribly surprised, the last time I go, if it is different.

In my experience, the approach leading up to the veil is a terrifying darkness filled with pain, but there is a kind of event horizon beyond which fear and suffering have no meaning. They simply don’t exist. There might be a medical reason for this, that the brain is too weak to produce the necessary chemicals to perceive those emotions, but on both occasions when I realized I was much more likely to die than to live, every care I had ever known dissolved in pure surrender. There was no danger on the other side of the veil. The toil and heartache are all here, in this world, in the months of excruciating recovery and the trials of life yet to come. It is not exactly true to say I didn’t want to come back. But it is true that the only answer I could give—the only answer I would ever want to give—to the peace of that surrender is, “Yes.”

Writing those words frightens me. I do not want to die. I have a husband and children who depend on me, family and friends who would grieve, books I still want to write, places I still want to visit, things I still want to accomplish in this life. I’m only thirty-eight. I’m too young to die—a ridiculous fallacy, but one I cannot shake despite all evidence to the contrary. It does no good to admit, either silently or aloud, that I know I really will be better off when I’m dead. It sounds like lunacy, even to me. But this is nothing compared to the lunacy of believing that a passage through the veil is The End. The veil is only the threshold of something unequivocally beautiful. That, over there—that is life. What we call life here is not even its shadow. It is the shadow of a shadow of a shadow.

Coming back from that state where I could “see” (for lack of a better verb) beyond this life, I am changed, but perhaps not in the ways one might expect. Death is not magic. I’m the same person now that I was before, with all the same strengths and weaknesses and failings I cannot seem to overcome. I am grateful to be here again, but the primary imprint the experiences left on my soul is not gratitude. It is mission. I did not get up and walk out of my metaphorical tomb by myself. I had no power to do so. Like Lazarus, I was called so that others “will see the glory of God.” It’s a far less dramatic mission than it sounds. My assignment is still the same as it ever was: to love the Lord my God with all my heart and to love my neighbor as myself. If it is marginally less difficult to do that now, it is only because I have less doubt about the outcome. I do not claim to have no doubt. My experiences are, after all, unverifiable, and for the second one, I was heavily drugged. Nevertheless, the testimony of my senses asserts that the hope of salvation is not hoped in vain.

For me, the knowledge of death is irrevocably linked to the knowledge of God’s eternal love. I have known that love here on earth in many ways: through the love of others, through the sacraments, through prayer, but it was in dying that I knew Him best. Rising back into this world is, by comparison, a tepid anticlimax. Perhaps that is why Lazarus never wrote his memoirs. Perhaps, like me, he could only shrug at the miracle. I AM is, and His words are true. Beside that knowledge, no miracle could ever be astonishing.