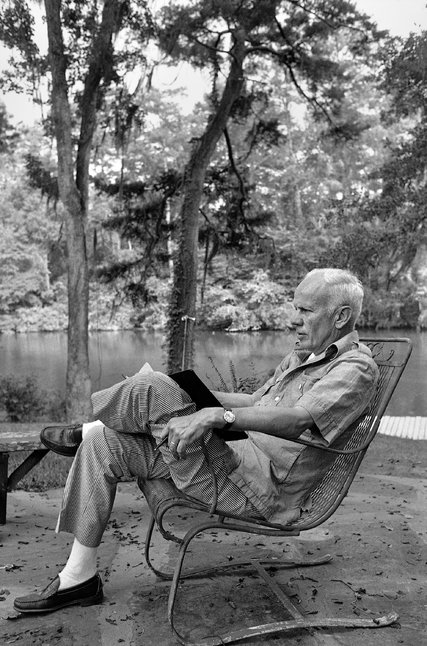 There’s an article going around the internet among many of my friends, especially the fans of Walker Percy, concerning Walker Percy’s Theory of Hurricanes. “It was his impression that not only he but other people felt better during hurricanes,” Percy wrote in The Last Gentleman, and the article argues that this was Percy’s own opinion. “Midge and the counterman were very happy. The hurricane blew away the sad, noxious particles which befoul the sorrowful old Eastern sky and Midge no longer felt obligated to keep her face stiff…. Everything was yellow and still charged up with value.”

Percy’s theory holds that dangerous situations afford us the opportunity to be better than our everyday selves, to become “action heroes or saints.” But he goes further: “I knew a married couple once who were bored with life, disliked each other, hated their own lives, and were generally miserable—except during hurricanes. They sat in their house at Pass Christian, put a bottle of whiskey between them, felt a surge of happiness, were able to speak frankly and cheerfully to each other, laugh and joke, drink, even make love.” (From his story, “Lancelot.”) Percy goes on to say that once the crisis has past and the everydayness of life creeps back in, our hurricane-happiness fades. “After the hurricane they took a good hard look at each other on a sunny Monday morning and got a divorce.”

Walker Percy lived in Louisiana, and no doubt weathered his fair share of hurricanes. I’ve lived in Louisiana almost all my life, and there was a time when I might have agreed with him. That time was before Hurricane Katrina, which happened 15 years after Percy died.

Hurricanes have always been a part of life in Louisiana, and I’ve lived through so many that I’ve lost count. When I was a kid in Baton Rouge, they were actually fun. We always got two days off of school: one to let the storm blow through, one to clean up the tree limbs and get the power back on. Hurricanes were an adventure, sometimes sparking phenomena like green lightning, or turning on lamps in the house all by themselves, both of which happened during Hurricane Andrew in 1992. As long as you didn’t get a tree through the roof, the odds of suffering major damage were low. When this was my experience of hurricanes, I might have thought Percy was on to something.

In the days leading up to the landfall of Hurricane Katrina in 2005, I was twenty-six, single, and I had just bought my first house. I was working two jobs, which between them totaled seven days a week. The prospect the hurricane posed for me was simple: finally, a few days off. My roommate and I invited a friend to come stay with us, and we stocked up on hurricane essentials, namely hurricane cocktail mix and rum. We were not unlike Percy’s couple, except that we liked each other on regular days, too.

There is no reason to rehash the horrors of Hurricane Katrina here. Suffice it to say that everyone in Louisiana—and Mississippi and  Alabama, and all along the Gulf Coast—experienced a shift in paradigm. Katrina broke the rules. There were no couples happily drinking whiskey in Pass Christian, because Pass Christian basically ceased to exist. It’s true that Katrina turned an awful lot of people into “action heroes and saints,” but the cost of that turn was unprecedented, not only in terms of human suffering, but in the emotional toll it took on our society. There was a weariness that set in with Katrina, a weariness magnified by the equally powerful Hurricane Rita that hit just a few weeks later—a weariness that has only festered and grown over the last twelve years as “once in a thousand years” disasters have continued to plague the Gulf South with frightening regularity. It used to be that the ones who had lost everything in a storm were few, easily aided by the many. Now, it seems the ones who have lost everything—some of them more than once—are the many, and I, with my dry house in Baton Rouge, count myself among the few. It’s not the same house where I camped out for Katrina, thank God. That one flooded last year.

“Action hero” has become for many people just another setting on the dial of life—like father, mother, banker, store clerk, little league coach—as the development of volunteer organizations like the now-famous Cajun Navy can attest. Or the countless groups of volunteers who have become frighteningly adept at gutting flooded houses. Philanthropy isn’t philanthropy anymore. My church parish took up a collection for Hurricane Harvey relief last weekend. It was the largest single collection we’ve ever had. Why? Because it’s the money people gave to all of us last year, and we fully expect that they will send it our way again when the occasion inevitably comes. We shuffle food and water and diapers around from disaster site to disaster site, dreading the day when the ubiquitous Red Cross trucks will tow them our way yet again.

It was never legitimate to romanticize disaster, though it was common practice in a pre-Katrina world. But to continue, even now, to circulate the idea that hurricanes make us “feel better”… I beg you not to say that to the mother trying to rock her baby to sleep in borrowed blankets on the floor of an overcrowded shelter. I beg you not to say it to the elderly man who lives on social security, who sold his house at a third of its pre-flood value because he could not afford to rebuild. I beg you not to say it to me while I held my sobbing six-year-old in my arms on the day he got out of school to let Harvey pass overhead. He remembered that the last time school was cancelled, it was also gone. It’s sad when we can’t look to our heroes, like Walker Percy, to give us perspective that helps to smooth the rough edges of life. But it’s even sadder when we cling to our heroes’ errors long after the evidence has piled up to prove them wrong.