The St. Joseph Altar—or, learning to love the culture you married into 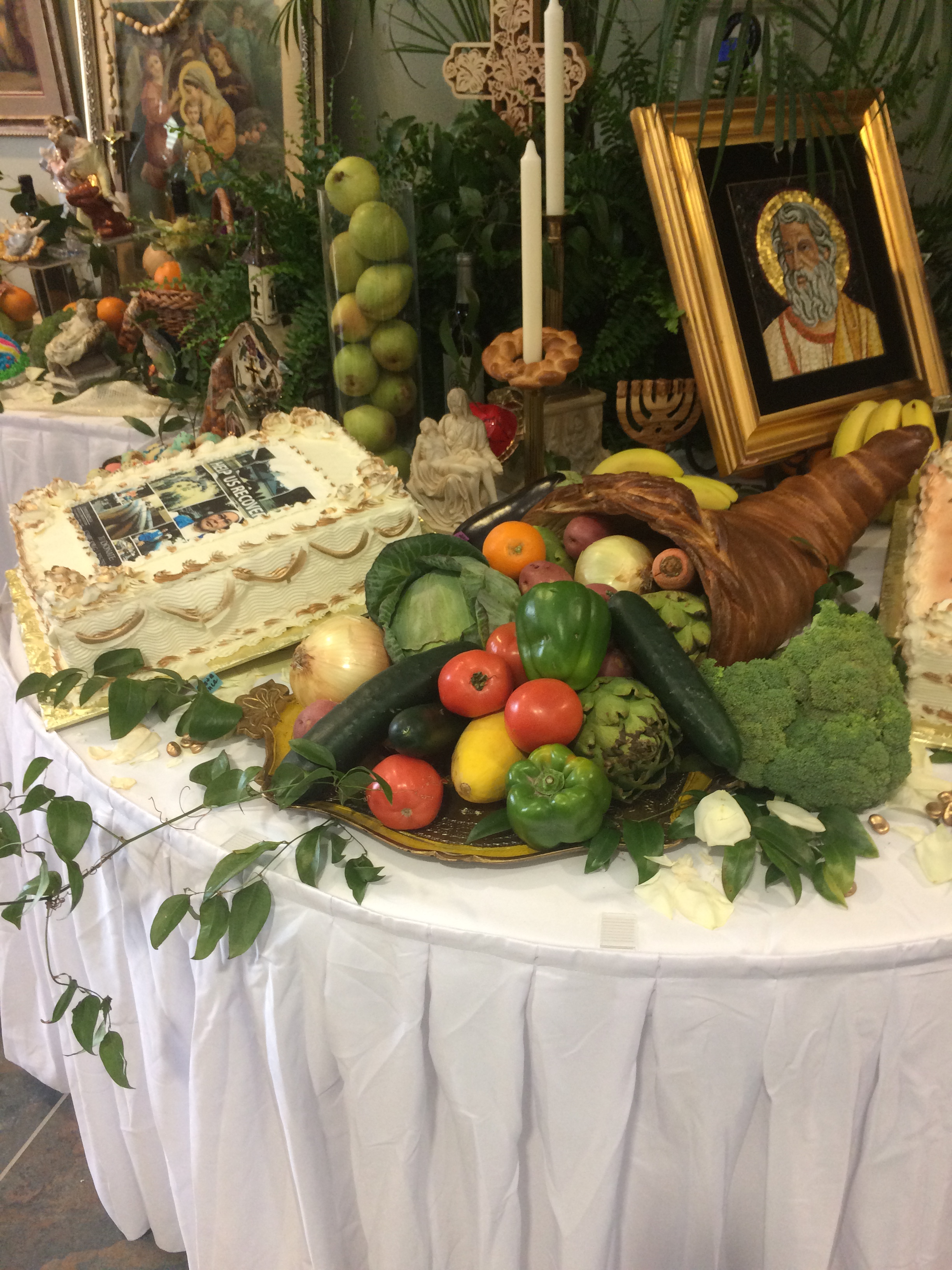 I have a confession to make: I’ve been Catholic all my life, and I had never heard of a St. Joseph Altar until about ten years ago, when I married a man of Sicilian descent. He’s as much an American from South Louisiana as I am, but my cultural heritage is French, while he’s a Ullo from a town called Marrero. The number of vowels in those two words ought to tell you that his grandparents often seasoned vats of homemade tomato sauce with Italian prayers and buried statues of St. Joseph upside down when they wanted to sell a house—another tradition this Cajun girl had never heard of until I married into the tribe. I didn’t even know St. Joseph was the patron of Sicily, much less any of the finer points of the devotion.

Since my husband first started hounding me, the first March after we were married, to find a St. Joseph Altar to attend, it seems like suddenly they’re everywhere: articles popped up in the local Catholic newspaper, my parish school decided to host one, friends galore—even my own parents, who never took any interest in such things when I was growing up—often invite me to attend them. Apparently, the custom has deep roots in Louisiana, as it does almost anywhere in the U.S where there’s a large group of Sicilian immigrants. I’m just late to the party. 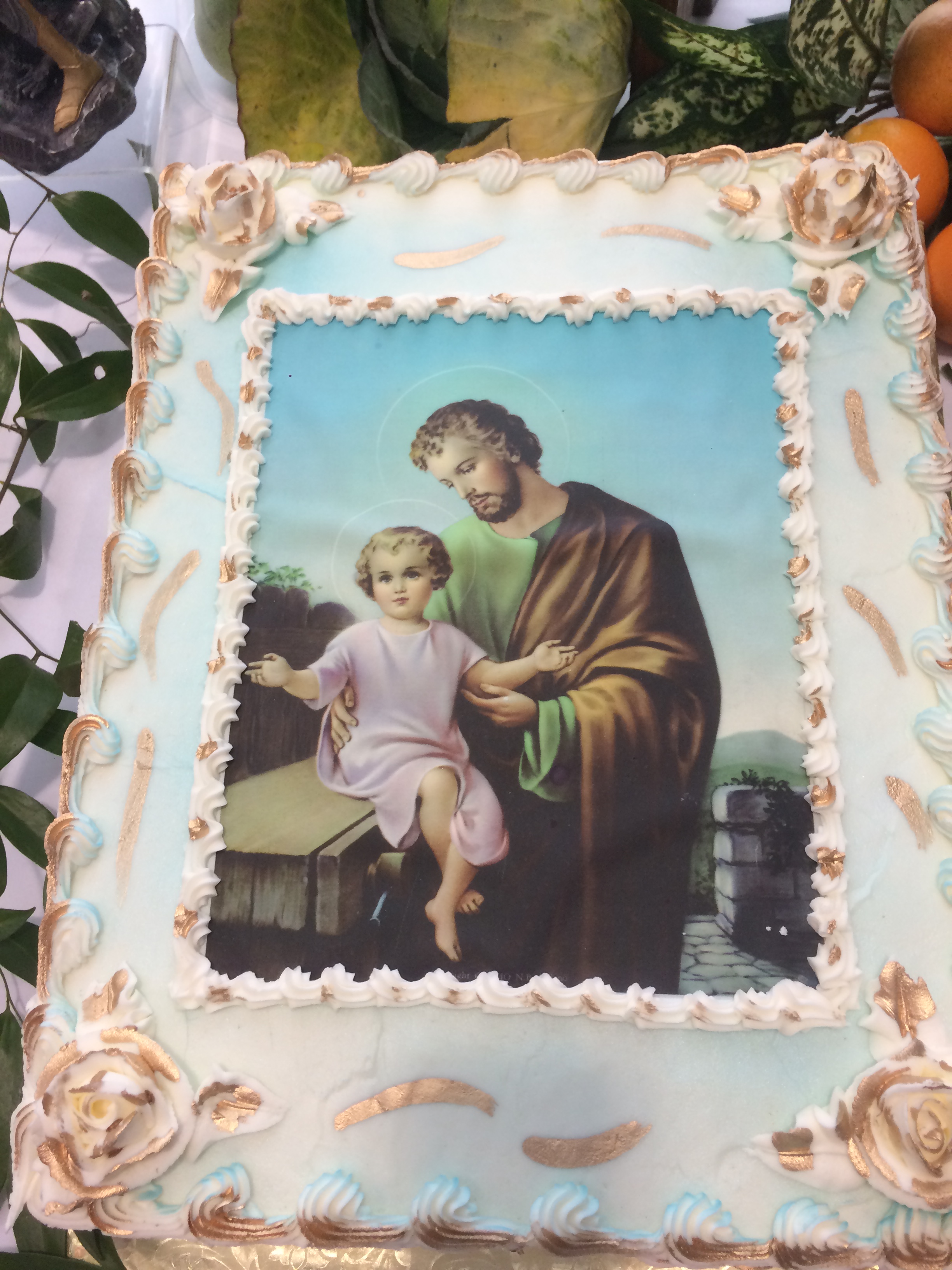 The tradition of the St. Joseph Altar dates back to the Middle Ages, when Sicily was suffering from drought and famine. The people prayed to St. Joseph to send rain to make their crops grow, but for a long time, the only thing that would grow—the crop that kept them alive—was the humble fava bean. When the rains finally came and the people harvested their crops, they set up an altar filled with the produce, gave thanks to St. Joseph, and then distributed the food to the poor. Since then, the annual altars, held on or near the Feast of St. Joseph on March 19, have become ever more elaborate, layered with symbol and ritual. You can read more about the history of the practice here and here.

Much like St. Patrick’s Day for the Irish, St. Joseph’s Day appears to this outside observer to be more or less an excuse to throw a party during Lent. It’s a holy, philanthropic party, and it’s soberer than St. Paddy’s Day with its green beer, but it’s a party nonetheless. At the large, public altars I’ve attended, the food displayed on the altar itself will be given to the poor at the end of the day, but there is also a meal prepared to give away to anyone who comes, usually pasta with tomato sauce (of course!) and a boiled egg. There is no meat at a St. Joseph Altar because the feast falls during Lent, when Catholics historically ate no meat at all. The food is often sprinkled with bread crumbs to represent the sawdust of St. Joseph the carpenter (although at the altar we attended last Sunday, it wasn’t. This made my husband upset enough to ask if he could volunteer to help next year. I suspect he will be the official Bread Crumb Sprinkler.) Once you’ve finished your pasta and whatever vegetarian side dishes come with it, there are enough Italian sweets for every person there to rot three sets of teeth. I don’t know the names of most of them, and I couldn’t spell them if I did, but I am perfectly happy to be ignorant and just eat. As my own people would say, Mais, ça c’est bon! 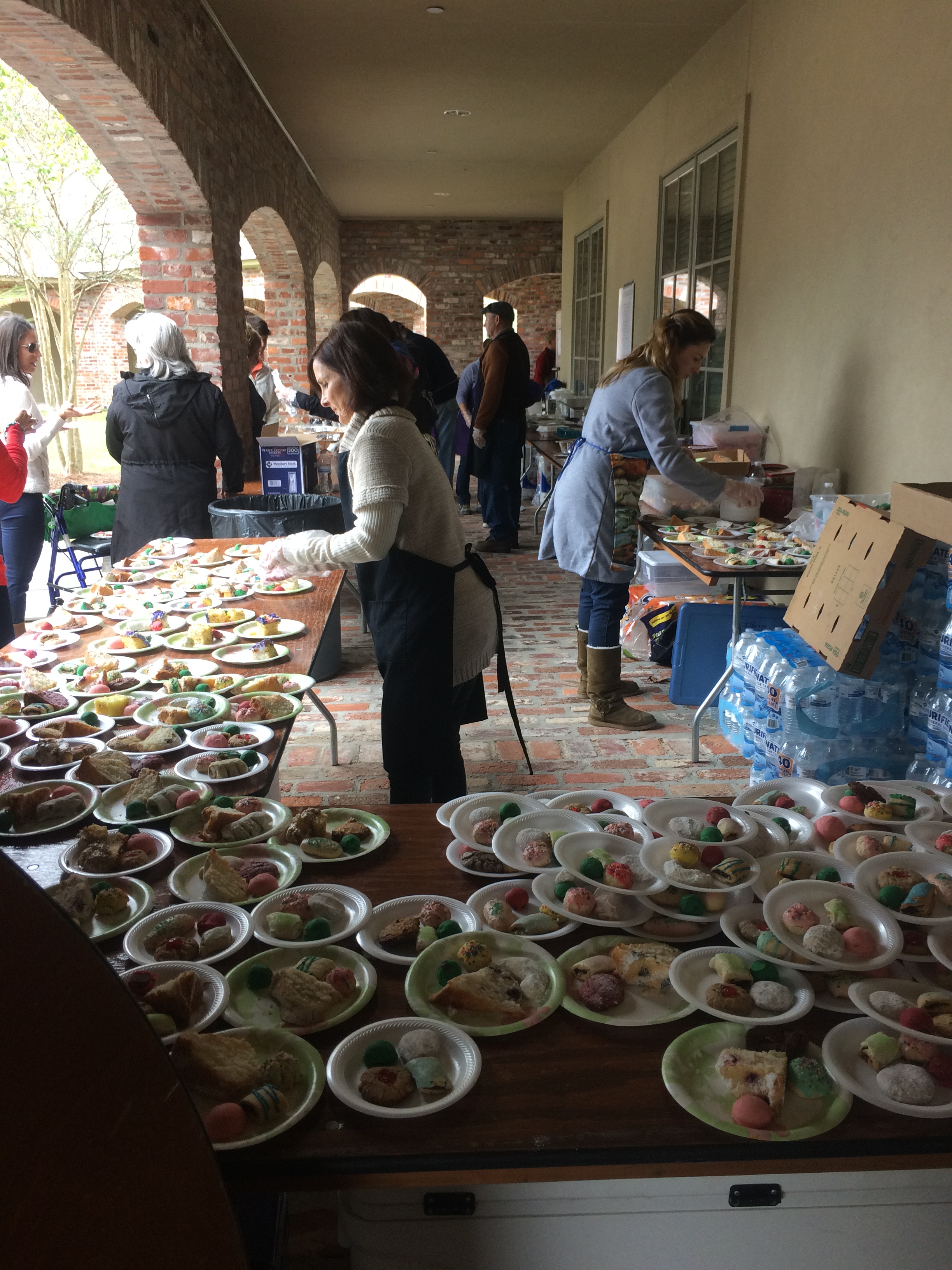 After you have stuffed yourself and viewed the beautiful culinary artwork that adorns the altar—and tried desperately, if not quite successfully, to keep your children’s snatching fingers out of all that meticulously worked icing—the generous hosts send you home with a little paper baggie full of yet more cookies, a blessed fava bean, a small hunk of blessed bread, and—if your fervently Sicilian husband goes and asks for it—also little baggies of blessed salt. This is the part of the St. Joseph Altar that I’m having trouble learning to love, because I am not allowed to divest myself of any of these blessed objects, ever. According to my husband, the bread is meant to protect against natural disasters and the beans are good luck. Once, I threw away one of the hunks of bread because I cleaned out our cabinets and thought it was just a random, forgotten crumb. It’s a mistake I shan’t be eager to repeat. But . . . now there are fava beans and small lumps of bread lurking in odd places, hidden in drawers, tucked into the corners of shelves, taunting me any time I try to clean. There really must be something blessed about the bread because it never seems to mold. It just gets really, really stale. I suppose these little objects ought to remind me to give thanks for God’s bounty and to ask for St. Joseph’s intercession, but they don’t. They only make me wonder why I have to keep fava beans and bread crumbs all over my house.

I guess I haven’t been Sicilian long enough yet. 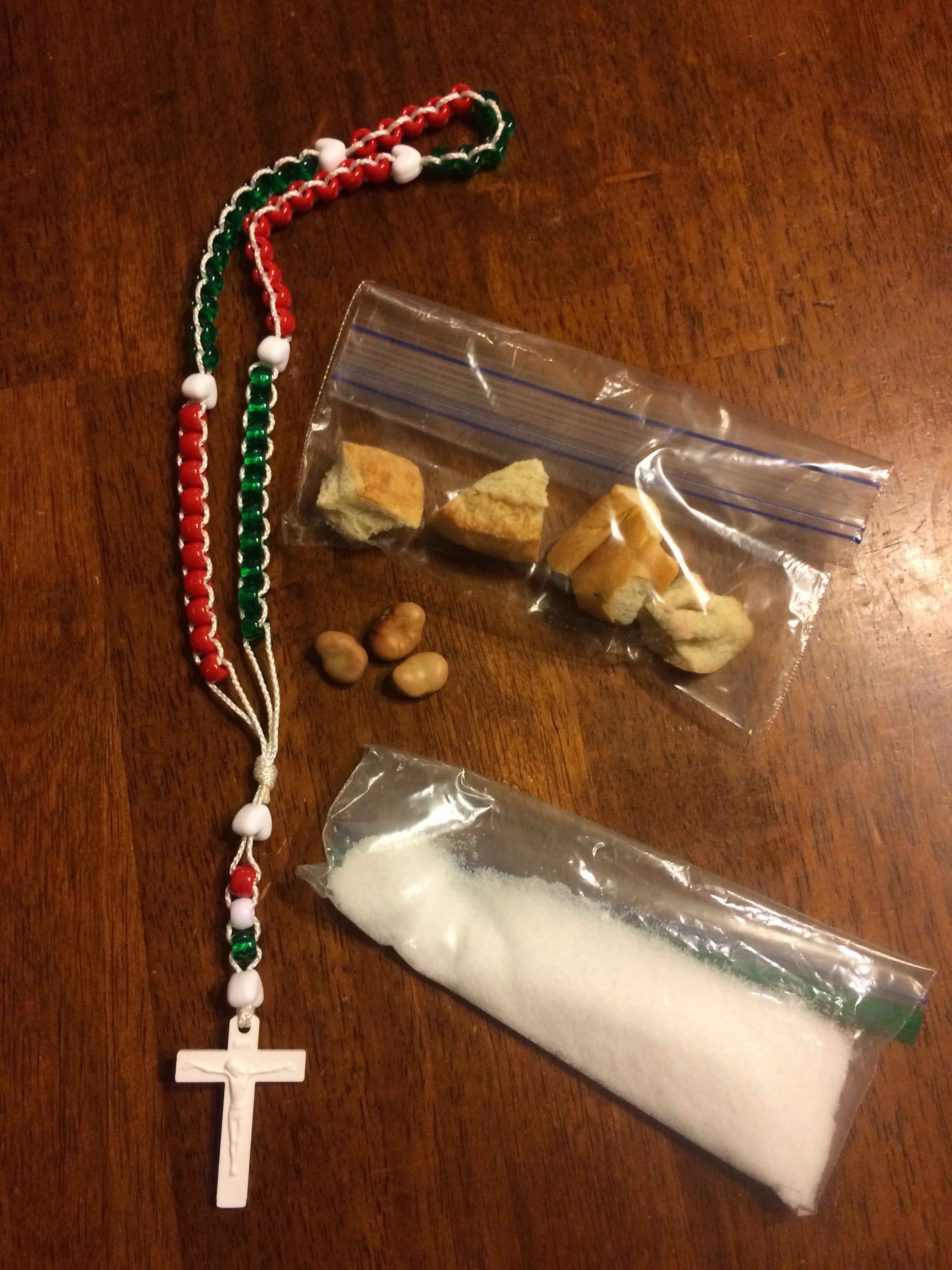 The take home loot: bread, beans, salt, and a rosary in Italian colors. The cookies had already been eaten.

We are strange creatures, we humans, who cling devotedly to our weird little habits that never seem weird until we see them through the eyes of someone who doesn’t share them. My husband feels about egg boxing pretty much the same way I feel about cluttering up the house with fava beans. Yet our weird little habits keep us rooted in the human family, reminding us that we belong to a community—and in the case of a St. Joseph Altar, that community is not only Sicily or the Church but the community of the saints in heaven. I suppose that’s worth the inconvenience of a few bread crumbs. 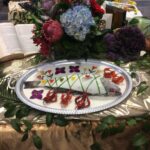 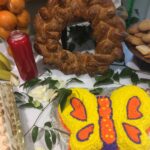 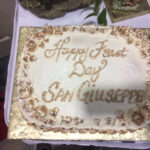 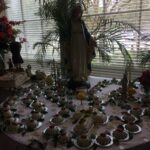 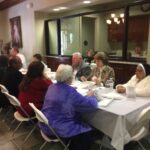 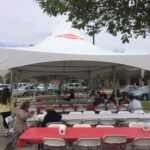 (I took these photos at the Cypress Springs Mercedarian Prayer Center in Baton Rouge, where the sisters are still trying to recover from the flood. They wouldn’t mind a little Lenten almsgiving, if you’re able.)

Karen Ullo is the author of the vampire saga Jennifer the Damned. To find out more, go to www.karenullo.com.