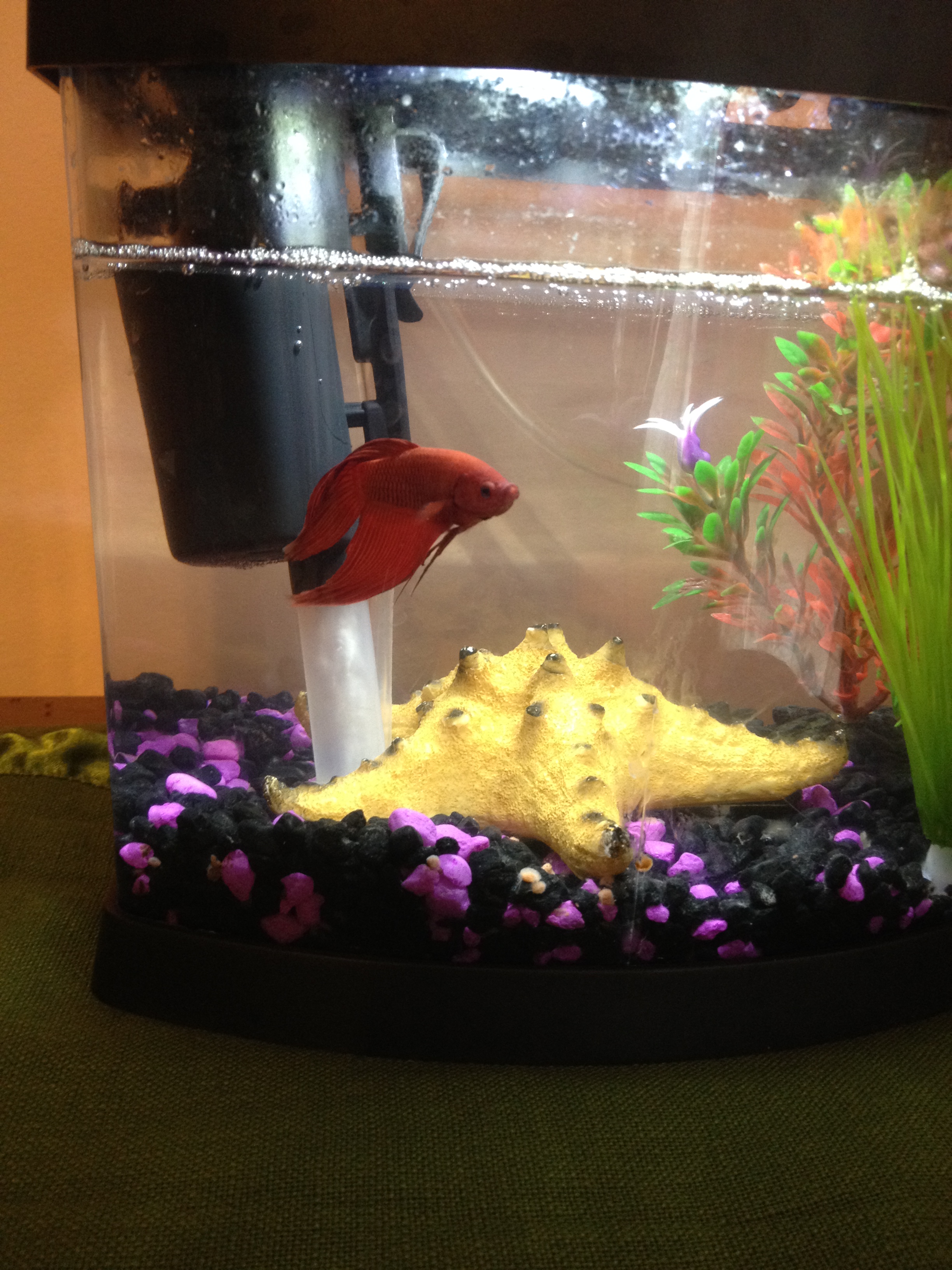 He looks so normal, doesn’t he?

When I wrote a vampire novel, I assumed – naturally enough – that the entire concept of the undead was fictional. Silly me. Because now I have a zombie living (existing? un-living?) in my house.

It all started back on Labor Day, when I finally broke down and decided to get my children pets. My littlest is terrified of dogs and my husband is allergic to cats, so we settled on fish. Two male betta fish dubbed Sam and Morris, both red because that is both kids’ favorite color, were purchased along with all the necessary accoutrements and detailed instructions from the staff at Petco. To make a long story short, after five trips to two different pet stores in three days, one faulty aquarium, two broken filters, and a bunch of truly obnoxious problems you don’t want to hear about, we had Dead Sam (which the children never knew about), Replacement Sam (who is the subject of this blog post), and Dead Morris, who was given a proper toilet-flushing funeral.

But eventually, I got the hang of the fish care business, and Replacement Sam became a thriving, happy member of the family. He’s quite a sociable fish, who actually comes to the glass and looks at you when you approach the aquarium. He was also voracious, eating just as often as you’d feed him, and generally living the fish good life. However, the aquarium developed a film of green algae. I bought a chemical to treat it, which didn’t actually work. But I just started cleaning the tank more often, and all was finally well…

…Until the Thanksgiving Holiday, when my children had a whole week off of school and nothing better to do than get into trouble. One day, while I was in the other room, my littlest climbed up into the cabinets he’s not supposed to go in, took out the algae-killing chemical, and put eight times as much as recommended into poor Sam’s fish tank. (In his defense, my son thought it was the water conditioner that makes tap water safe for betta fish, and he put the amount we use for water changes.)

Of course, I immediately changed the water, but it appeared I was too late. Sam took up residence on the rocks at the bottom of the tank and barely moved at all. He stopped eating entirely and would only stir every once in a long while, when he would swim straight to the surface, appear to either take a drink or blow a bubble, and swim straight back down. The rest of the time, he seemed comatose. I told the children Sam was dying, and they should be prepared to say goodbye to him. (They took this news a little too easily, and started making plans for a new fish named Dan.) For five days, Sam lingered in this half-dead state, and every morning I expected to find him floating sideways.

But at long last, Sam began to rally. Gradually, he began to swim for longer periods to other parts of the tank, and then to become sociable again. He would still sometimes swim to the surface and do his bubble-blowing thing, but he didn’t immediately become comatose afterward. Now, more than two weeks after his overdose of algae killer, Sam is behaving like good ol’ Sam again.

Except he doesn’t eat.

Since he OD’ed, no one has seen Sam take a single bite of food. Once, I saw him put the food in his mouth and then spit it out. Once. The voracious fish who would eat as much as you let him has not consumed so much as a single morsel in more than two weeks. He’s only about two inches long. There’s nowhere on that little fish body to store enough fat to keep him alive this long. But when we feed him, he lets the food hit him on the way down without paying it the slightest bit of attention.

There are only three possibilities:

I know the first two sound slightly more logical than the third. But who ever heard of a fish having enough social awareness to be shy? And the idea that he’s living on microbes seems even less likely, considering that – at eight times the recommended concentration of the chemical – even the algae is finally dead.

Truth is stranger than fiction, they say.

My fish is a zombie.