I wrote this two years ago for the mid-term elections (published over at Dappled Things), but it seems even more apropos now.  Enjoy! 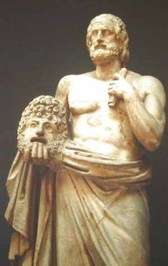 I don’t know about you, but I always seem to leave the voting booth with my eyes closed and my upper lip curled from the stench of… well, you know. Since misery loves company, I decided to console myself with the electoral cynicism of greater minds than mine.

The best argument against democracy is a five-minute conversation with the average voter.

An election is coming. Universal peace is declared and the foxes have a sincere interest in prolonging the lives of the poultry.

Elections belong to the people. It’s their decision. If they decide to turn their back on the fire and burn their behinds, then they will just have to sit on their blisters.

However, it turns out that when you search for quotes about “election,” you also get things like this:

I have not yet elected to bestow the grace of my saliva upon another human being. I have never… kissed anyone. ― Laini Taylor, Night of Cake & Puppets

Okay, the Greeks invented this democracy stuff. Surely, they couldn’t have been jaded about it back when it was still all shiny and new?

In a democracy, someone who fails to get elected to office can always console himself with the thought that there was something not quite fair about it. ― Thucydides, The History of the Peloponnesian War

To win the people, always cook them some savoury that pleases them. ― Aristophanes, The Knights

When one with honeyed words but evil mind Persuades the mob, great woes befall the state. ― Euripides, Orestes

So why, exactly, did we come back several thousand years later and decide that these guys had it right? Oh, well, too late. No roundup of cynicism would be complete without Douglas Adams:

The major problem—one of the major problems, for there are several—one of the many major problems with governing people is that of whom you get to do it; or rather of who manages to get people to let them do it to them. To summarize: it is a well-known fact that those people who must want to rule people are, ipso facto, those least suited to do it. To summarize the summary: anyone who is capable of getting themselves made President should on no account be allowed to do the job. ― The Restaurant at the End of the Universe

All right, enough patriotic wallowing. Let’s get out there and rock the vote!