Natural disasters are not all bad. At least there’s free food.

The Red Cross Disaster Relief truck came to my parents’ house around two o’clock on August 18, 2016: Day 3 of the cleanup in the flooded parts of Baton Rouge. Some other parts of South Louisiana still remained under water, but here, the streets that had so recently been navigated by boats were lined with piles of rotting furniture, mildewed insulation, and drowned memories. And the cars of all the people who had come to help. The Red Cross truck could barely maneuver past the unbroken queue of parked vehicles that lined both sides of the streets. But maneuver they did, blowing an air horn and shouting through a garbled speaker, “Chicken! Water! Come get some lunch!”

The Red Cross food truck, parked in my parents’ driveway

Y’all, the Red Cross can cook some chicken nuggets. Yum.

On Sunday, the men’s club from St. Jude Catholic Church here in town (a non-flooded parish) brought hot lunches to serve at my flooded parish after Mass. Spicy spaghetti, green beans, and they even threw in a brownie. A few days later, a caterer donated whole trays of chicken alfredo that were distributed through our church. A friend of my parents’ brought us vegetable soup and banana pudding. At one point, my refrigerator was so full that I had to turn down an offer of free boiled shrimp – and I promise, I am not one to turn down free boiled shrimp.

If the recovery effort takes much longer, I’m going to need new clothes even though mine didn’t flood.

“Simon, son of John, do you love me more than these?”

On the evening of Saturday, August 13, an old family friend named Charlene saw the flood waters creeping up her street. She called my parents to ask if she could stay the night at their house, and of course they agreed. The three of them took a walk through the neighborhood around sunset and saw a little water bubbling up through one manhole. They shrugged, went home, and went to bed.

At 5:30 Sunday morning, they were awakened by a neighbor pounding on the door. The water already covered almost the whole yard. They scrambled to get valuables onto high shelves and pack a few necessities. They called my brother to say they were on their way to his house, but they never made it out. The water was already too deep to allow their cars through. They brought an axe up to the attic in case they had to escape through the roof and then watched as the toxic water with a current strong enough to knock over the refrigerator rose knee-deep. All phone service – landlines and cell phones – stopped working. There was no way to call for help. Finally, around 11:00 a.m., they stood at the plate-glass windows at the front of the house and managed to flag down a boat. Two civilian fishermen, part of the impromptu Cajun Navy who saved thousands of lives, brought the three of them to dry land with nothing but the clothes on their backs, the two ladies’ purses, and a plastic bag with their prescription medications. 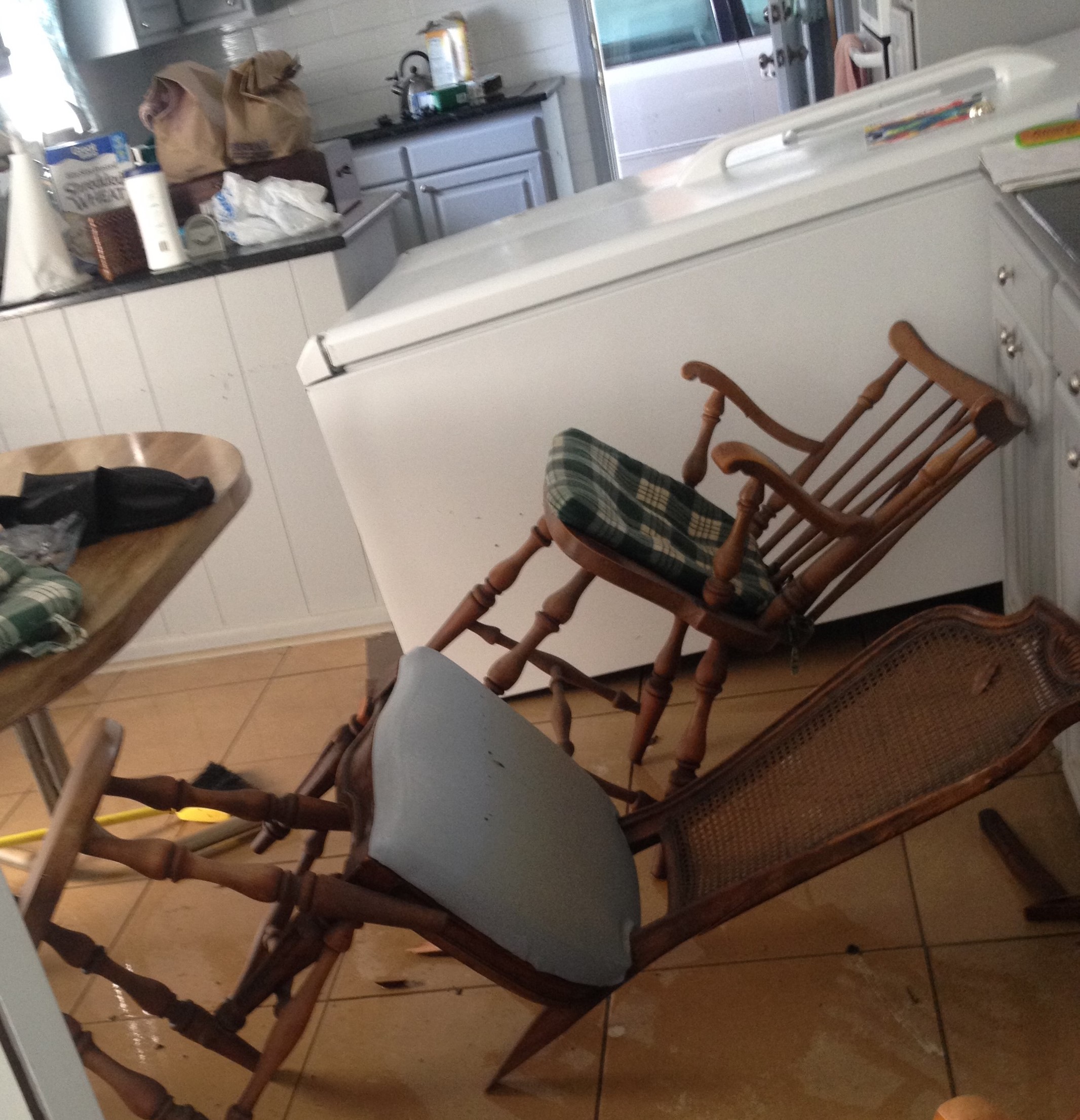 Yes, a flood can do that

Meanwhile, my brother and I and our spouses spent that Sunday morning desperately trying to find out why our parents and Charlene had never arrived at his house even while we watched the water rise all around us. We watched our friends posting on Facebook about their own losses and their relatives in need of rescue, powerless to help.

Sometime around noon, my mom finally got a cell phone call through to me, and my husband found a circuitous, dry-enough route to go rescue my parents and Charlene from the boat-launch point. We discovered on Tuesday, when the roads were finally clear, that Charlene’s house never took a drop of water.

I know at least a dozen people who ended up in such bizarre “islands” inside the flood waters, people whose neighbors flooded but somehow their own houses stayed dry. One couple I know took eighteen inches of water during the previous record-setting flood in 1983. Despite the fact that the 1983 records now look like Ryan Lochte next to this flood’s Michael Phelps, that couple’s house got no water at all. Floods are weird.

As for me, my house was not an island; my whole neighborhood was. My husband did some research and discovered that we’re built on the high side of a fault line. We may never move.

Thirteen people died in the floods, though that number is mercifully low considering the extent of the devastation. An estimated 110,000 homes flooded across twenty parishes (counties). Seven trillion gallons of rain falling in less than three days would have that effect anywhere. My children’s school was one of the first places to go under.

The church where I work got water in several buildings, but fortunately, not in the church itself. Virtually everyone I know either flooded or they’re housing flooded friends and family, just as my parents are now living with me. No one is unaffected.

But the devastation is not the story. The devastation has never been the story. From the moment the waters began rising, this community jumped into action as only a people who have known more than our fair share of tragedy could do. Churches, schools, civic organizations, and loose associations of random people have rallied to help in every imaginable way, from boat rescues to gutting houses to providing art camps for children in shelters to giving away free shoes and volunteering to do laundry. Ask and you shall receive. While all the people I mentioned have been feeding me, I have been cleaning out my attic to provide others with children’s and maternity clothing, even while working to salvage as many of my parents’ possessions as possible. There is little distinction here between victims and volunteers, helpers and helpees. Most of us locals are wearing both hats. My church with its flooded buildings is nevertheless a staging point for getting supplies to those in need. Within two weeks, my children’s flooded school reopened in three different locations, using classroom space borrowed from three different campuses. The school has no religious affiliation, but one of its new locations is at a Methodist Church. These are the kinds of partnerships we have seen so many of in these days: partnerships that cross every artificial line created by society to bind us together as one people. We here in Louisiana are eternally grateful for the support we have received from across the country and the world. We know we couldn’t recover without you. Federal, state, and local governments have also done their jobs well. But anyone here will tell you that the real story is how well and how quickly we, the people of South Louisiana, 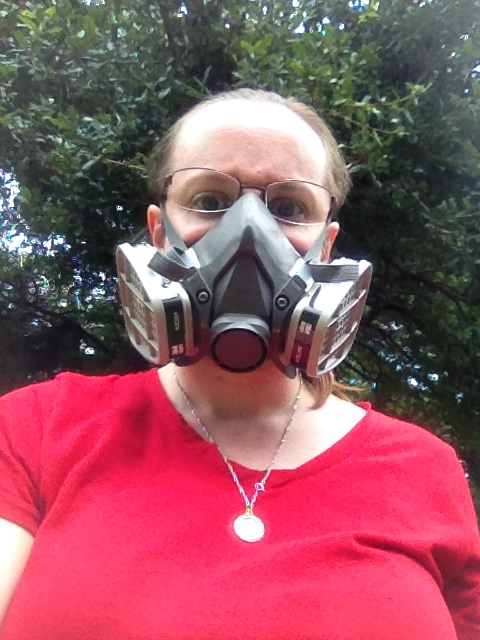 have leaped to each other’s aid.

If you want to see Christ at work in the world, come to South Louisiana. You will find Him working through the members of churches of every denomination, through Hindus and Jews and Muslims, through atheists and the unchurched. You will find Him working through black and white, rich and poor, gay and straight, male and female, every label you can think of. Just as flood waters do not discriminate, neither does Christ’s love. If you have never seen the face of God, come to South Louisiana, turn to the person next to you, and shake their hand. Ask them how they fared during the flood. Listen to their story. Then grab a drywall saw, a respirator, and a free bowl of gumbo and become Christ with us.

“Lord, you know everything; you know that I love you.” 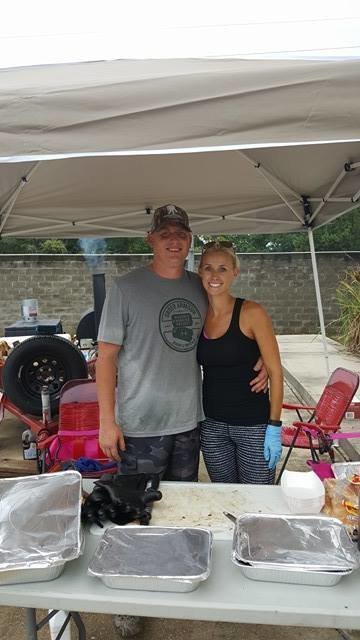 These folks cooked 108 lbs. of brisket for one of the shelters, purchased with their own money. Photo from Huffington Post