A Farewell to Shouts and Whispers

[During the Christmas Truce of 1914, a] British Daily Telegraph correspondent wrote that on one part of the line the Germans had managed to slip a chocolate cake into British trenches.  Even more amazingly, it was accompanied with a message asking for a ceasefire later that evening….  They proposed a concert at 7.30pm when candles, the British were told, would be placed on the parapets of their trenches. The British accepted the invitation and offered some tobacco as a return present.  That evening, at the stated time, German heads suddenly popped up and started to sing.  Each number ended with a round of applause from both sides. – from firstworldwar.com 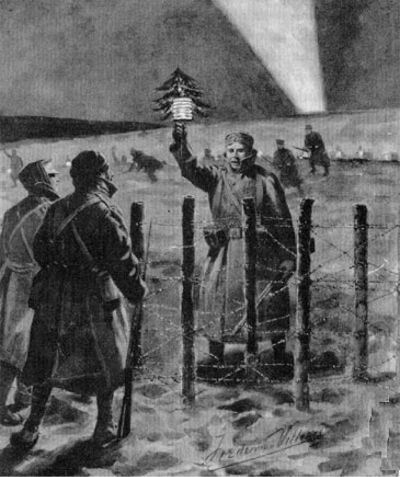 It is hard to deny that we live in a world at war.  The omnipresent “culture war,” with its daily iterations of outrage at terrors both real and imagined, has made our everyday world a loud, vitriolic, and unforgiving place.  Dappled Things has long understood that our mission is not only to foster Catholic art and literature, but, to quote our founder Bernardo Aparicio Garcia, “to provide a safe-haven from all the NOISE that the Internet-age has ushered in.”  This is how we at Dappled Things view our role, and, by extension, the role of the Catholic art and literature we publish and promote.  Beauty is an oasis; we believe that art can re-shape and revitalize the culture not by being another weapon in the hands of the warriors, but by embodying the ceasefire.

It is against this backdrop that I would like to reengage the question of “Shouts versus Whispers” in Catholic fiction.  You may remember Paul Elie’s 2012 essay in The New York Times, “Has Fiction Lost Its Faith?” in which he contended, “This, in short, is how Christian belief figures into literary fiction in our place and time: as something between a dead language and a hangover.”  He went on to repeat Flannery O’Connor’s famous quote, “To the hard of hearing you shout, and for the almost-blind you draw large and startling figures.”  Gregory Wolfe, editor of Image journal, responded in The Wall Street Journal with “Whispers of Faith in a Postmodern World.”  He contended that Catholic literature was very much alive, only writers had abandoned Flannery’s technique of shouting for a more subtle “whisper.”

I am not interested in trying to assess the current state of Catholic fiction.  Elie and Wolfe (and Dana Gioia) have already done so with far greater precision than I ever could.  But one thing that emerged from this conversation was that, in multiple platforms, including here at Dappled Things, Catholic writers themselves adopted the language of shouts vs. whispers to discuss how faith can or should be portrayed in their own work.  Should we (Catholic writers) shout–that is, paint larger-than-life stories where Catholic themes are obvious but may risk alienating non-Catholic audiences–or should we whisper, painting subtle portraits of grace that are more palatable in modern society, but also more likely to go unrecognized?  Of course there is no consensus, but it troubles me that, nearly three years after Paul Elie’s essay appeared, I continue to see the debate framed in these terms.

I may be late to the party, and it may be heresy to contradict Flannery O’Connor, but I think it is long past time we abandoned the metaphors of shouts and whispers.  Shouting and whispering are both terrible abuses of the human voice, two of the very fastest and easiest ways to cause permanent damage.  The fact is, whether you shout too much or whisper too much, the result will be the same: strain, hoarseness, and possibly nodules on your vocal cords.  And is not an author’s “voice” his or her most important asset?

Let’s also stop to think for a moment about how people actually respond to shouts and whispers.  There are few things less attractive than someone screaming at you.  It’s intimidating.  It triggers fight or flight instincts.  And, no matter how salient, well-reasoned, or even beautiful the screamer’s message may be, the hearers rarely pay attention because they are either yelling in return or trying to get away.  As for whispers, most people end up confused and frustrated by the continual effort of saying, “What?  Speak up!  I can’t hear you.”  Shouts and whispers are equally ineffective ways to convey any kind of message, fiction or non.  Are these really the metaphors we writers should embrace when we ponder how to portray our beloved Catholic faith?  If the object of true art is to create beauty, then neither shouts nor whispers can ever fit the bill because neither a shout nor a whisper is beautiful.

That is why Catholic fiction needs songs.

Let them be forte or let them be piano.  Better yet, let the ways we weave faith through our narratives crescendo and decrescendo through the scenes.  A single volume makes neither music nor the spoken word sound interesting; only dynamic contrast keeps listeners intrigued.  In fact, “soft” and “loud” imply nothing about the quality of a sound except in their extremes.  It is pitch, tone, and timbre that separate the beautiful from the mundane.  There is room enough for lullabies, arias, hymns, ballads, dirges, jazz, rock, hip-hop, whatever.  The point is, writers need to use our “voices” to portray our faith as something outside the commonplace, something that captures the ear and makes the hearer want to stop and listen.  A shout will never be heard above the booming cannons of the culture war; neither will a whisper.  But a song… yes, every once in a very long while, both sides can be convinced to lay down their arms for a song.  It may not end the war, but it can create a ceasefire.

What do I mean, when I say that Catholic fiction should sing about faith?  Probably, what Paul Elie means when he calls for fiction that “dramatize[s] belief the way it feels in your experience, at once a fact on the ground and a sponsor of the uncanny, an account of our predicament that still and all has the old power to persuade.”  I think everyone involved in the conversation about Catholic fiction wants to find and/ or create the same thing: stories that inform the beauty of their own art form with the beauty of God’s grace.  These stories already exist; one has only to pick up any issue of Dappled Things to discover that Catholic authors are already singing.  However, the more often I hear the terms “shouts and whispers” applied to Catholic fiction, the more I wonder how many beautiful voices have already been strangled.

Metaphors matter in fiction, even more so when the metaphor informs how a writer approaches his or her own work.  So, as one Catholic writer to any others who may read this, let’s stop whispering.  Let’s stop shouting (and, for goodness’s sake, let’s stop shouting about whether or not we should shout.)  Let’s make something beautiful.  Let’s get out there and sing.

Karen Ullo is the author of Jennifer the Damned, to be released on Halloween, 2015 by Wiseblood books.  To find out more, go to www.karenullo.com.